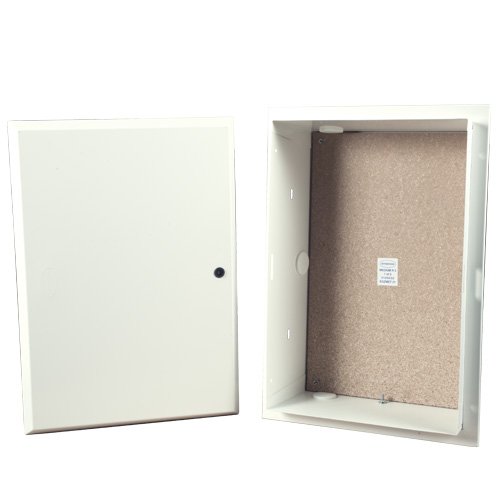 We designed the R5 back in the 1970s for the electricity boards that needed a more vandal-resistant and sometimes fire-resistant alternative to the plastic meter box.  We chose to make the R5 from Zintec or mild steel coated in Zinc to add an extra protection layer, together with a durable powder coating finish, the result is a very durable meter box. The R5 design is one that matches most closely in appearance the standard Small GRP box.

Supplied in two halves allowing fitting of the box during building work and hanging of the door later when there is less chance of site damage. Designed so that the door can be hung on the left or right hand side of the pre-installed box to best suit local conditions.

Meter board and earthing stud fitted to the box as standard. Cable entry holes fitted with blind grommets to allow choice of positioning. All boxes fitted with slam lock and supplied with easy to handle triangular plastic key. Available in ESI Small, Medium and Large sizes.

In 1979 the standard R5 was tested to the BS476 Part 8 standard and gave 38 minutes fire resistance.  In 2013 we re-tested an upgraded version of the R5 to the latest, European fire resistance test method (BS EN1363 and 1366) and this model achieved more than 60 min fire resistance.  Find the R5 Fire Rated Meter Box along with the rest of the Passive Fire Protection range.

Delivery from Stock is 48hrs from receipt of order.

Made to the dimensions specified in the Electricity Supply Industry ESI 12-3, the range of Small, Medium and Large boxes are designed for semi-recessed, flush or surface mounting fitting. The meter boxes are fabricated from corrosion-resistant, zinc-plated steel (the R16 is stainless steel) and are normally powder coated white for a very durable finish.

Looking for fire protection for an electric meter box? We have the fire-rated R5 meter box available, tested to EN 1363-1 and EN 1366-3 fire resistance test standards. We have also developed the FireSeal Fire Rated Access Panels, a made to measure, retrofit solution that provides 60 minutes of fire protection.

TOP
We use cookies on our website to give you the most relevant experience by remembering your preferences and repeat visits. By clicking “Accept All”, you consent to the use of ALL the cookies. However, you may visit "Cookie Settings" to provide a controlled consent.
Cookie SettingsAccept All
Manage consent